On a frozen, post-apocalyptic Earth, 60 players will fight across a hostile, frost-bitten world filled with hundreds of AI enemies and creatures. Squads of three will compete to survive and dominate in a hybrid of sandbox-style PVE and class-based PVP, where survival is only half the battle.

Choose from a roster of adaptive Explorers, arm yourself with a combination of unique abilities and weapons, and conquer the challenges of a frozen wasteland.

The first time you enter Scavengers - and while you’re still in the lobby - you can play a tutorial that will help point out base level game mechanics and tactics. It’s well worth playing through so that you can better understand the core combat, key objectives and controls.

If you want to skip the tutorial and jumps straight into the multiplayer matches though, you can do so from the main menu. 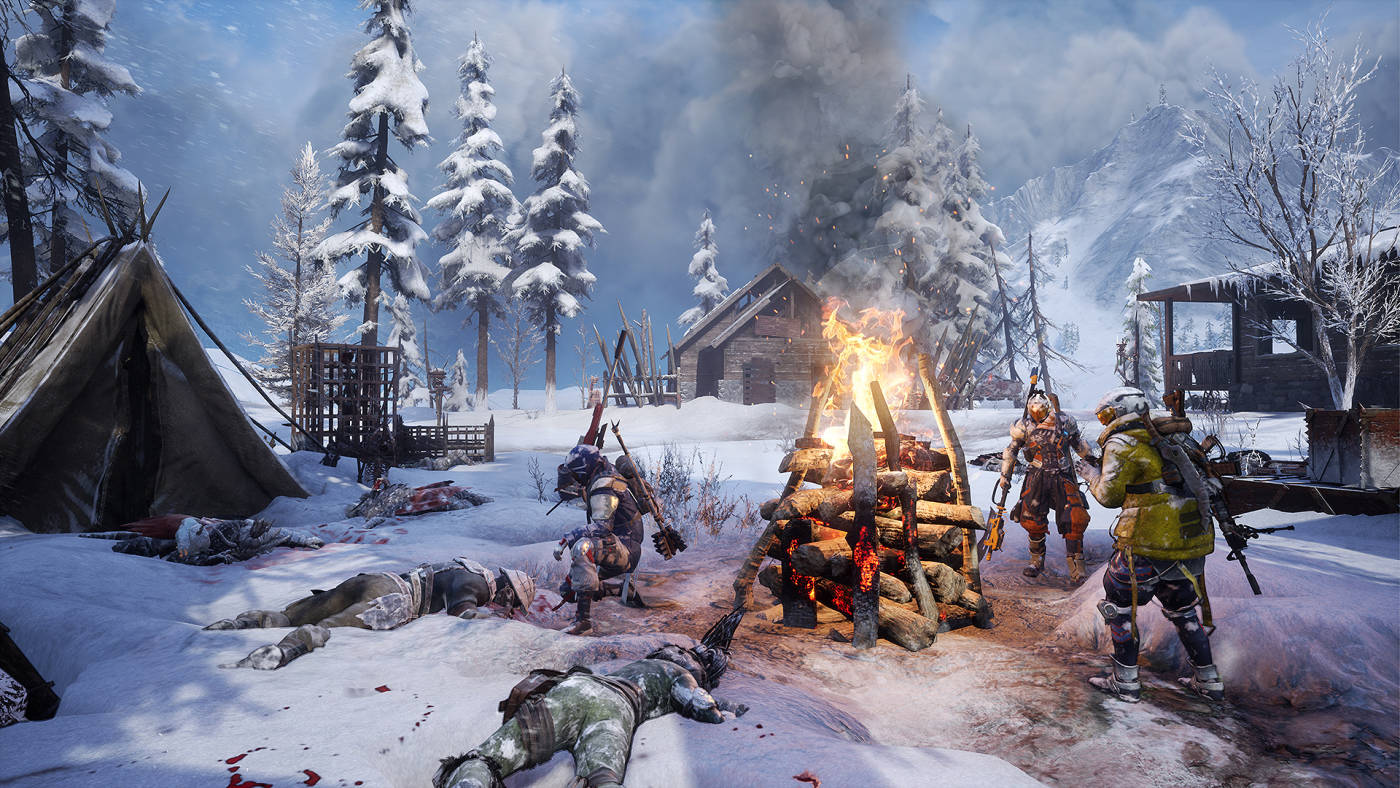 You’ll want to quickly scavenge for weapons and supplies. The sooner you’re armed, the better protected you’ll be from any unwelcome surprises lurking in the wilderness.

Search nearby buildings and camps to find gear. You’ll have 2 weapon slots in your inventory and you can switch out between them, so arm up ASAP.

Be on the lookout for Scrap, which you can find in lootable containers, from enemies you kill, and in Scrap cache camps. Collect it to help you craft shield upgrades, your class weapon, and other items from your loadout.

Keep an eye out for any food lying around, like berries or any potential wild game nearby to hunt (wolves, deer, rabbits, and even bears). The food you gather or get from hunting will be very helpful in replenishing your stamina (especially for those focusing on melee)! 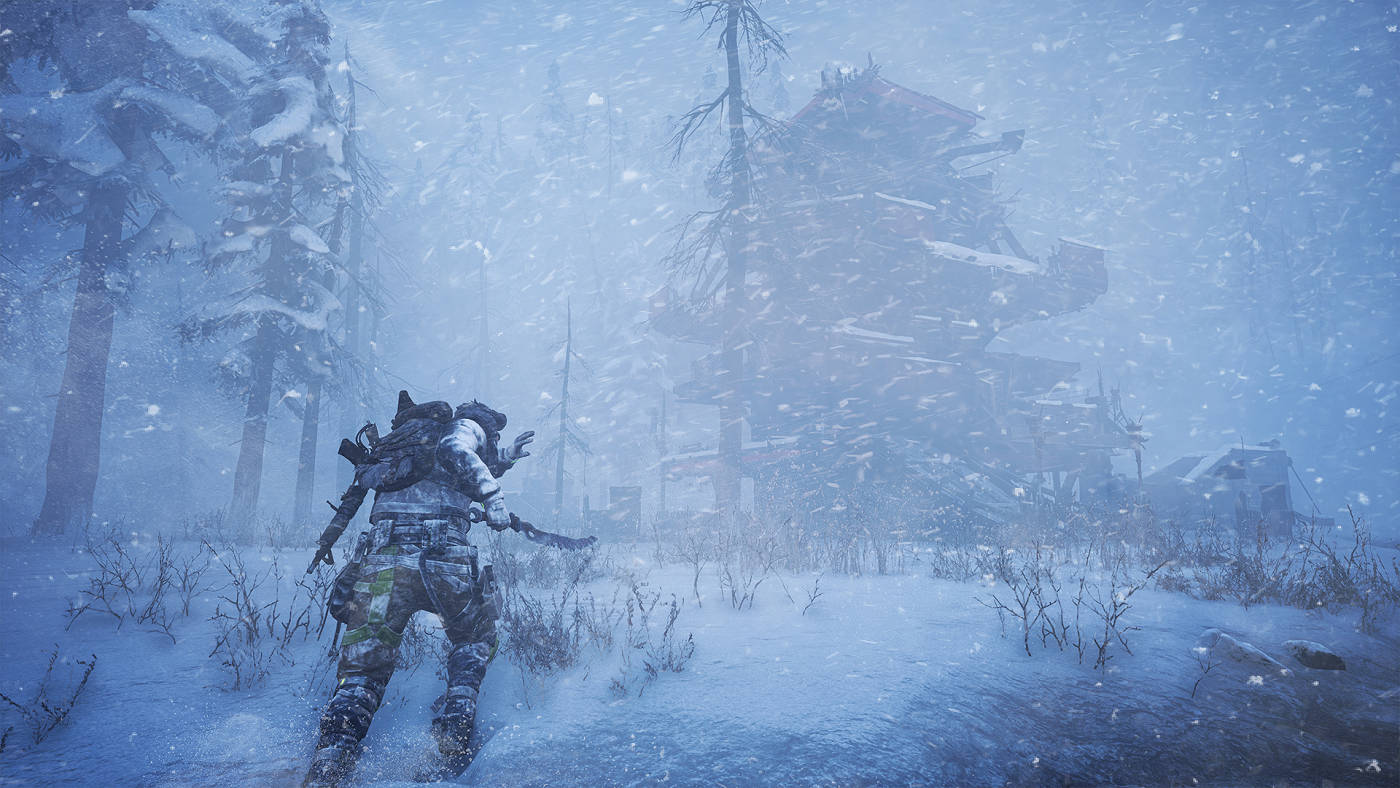 Some consumables, such as thermal boosts, will allow you to stave off the cold as well.

Also, be on the lookout for vehicles. They can come in handy to help outrun a storm, getting you to shelter faster.

While the roaming storms are cold, pay special attention to the large border storm that surrounds the map. This storm is much more lethal than the roaming storms and will periodically collapse inward, shrinking the playspace. You can’t outrun this weather front for long, so watch the map for changing storm locations and make sure you get to safety in time.

Throughout the world, you’ll encounter a variety of dangers. Most remaining life on Earth is hostile towards Explorers, so you’ll need to use your wits to outlast those that wish to take you and your team out.

On the planet, you’ll face a variety of threats, including:

An important note about death: If you die in Scavengers, you will be recloned and sent back into the action, so long as you have surviving teammates. Recloning takes some time, so if your team is wiped out, it’s game over. It’s also game over if you die on the planet, as you’ll also lose all of your salvage and datapoints 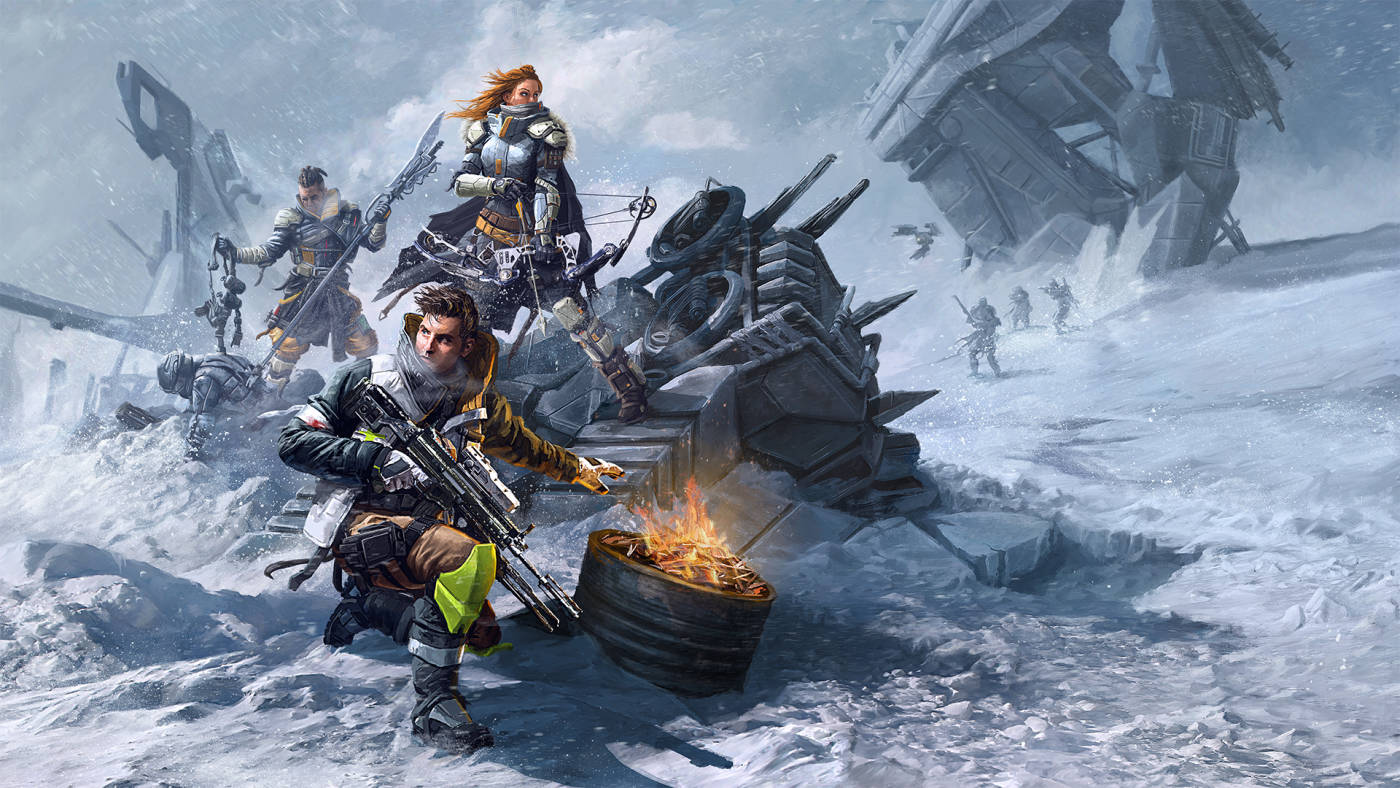 When you play a match of Scavengers, you will choose a unique Explorer to form your 3-player squad. Halden, Valora, and Tarik will be unlocked by default and other characters can be purchased with Chips, which you’ll get when leveling up your account. Each Explorer also comes with a unique class ability and class weapon.

From there, you can further tailor your loadout to include other weapons, items, and passive abilities (known as Talents) to create an Explorer that fits your playstyle.

You’ll have access to 4 different talent categories: defensive, aggressive, movement, and utility. Each comes with a set of options you can select from to modify your gameplay.

Before you join a match though, be sure to tweak your loadouts for the different characters so you can experience the variety of playstyles Scavengers has to offer.

Crafting and Research are linked and spending time on them can unlock very useful things, especially for your loadout.

Every time you level up, you unlock access to crafting recipes from your loadout. Be sure to pay attention to what’s available in your crafting menu. If you’re low on resources required to craft, look for Scrap cache camps.

Keep in mind that crafting is not instantaneous. The more complicated the item, the longer it will take to craft. Therefore, think about the amount of Scrap you have before using it and weigh out what you want to craft the most.

The research system will allow you to unlock more recipes to add to your loadout. To unlock research, play sessions, and search for salvage items at scavenge sites. You are also rewarded with salvage for successful extraction and match performance.

Salvage items are leftovers from years past, which have been hidden throughout the planet. Collecting and returning them to Mother will provide you with the necessary materials to research new weapons, items, and talents between matches.

Once you’ve invested the required resources and time into a research project, it will then be available for you to take into a match as a craftable item. Research is the key to customizing each match to your playstyle so remember to always update your loadout for characters when you unlock new items. 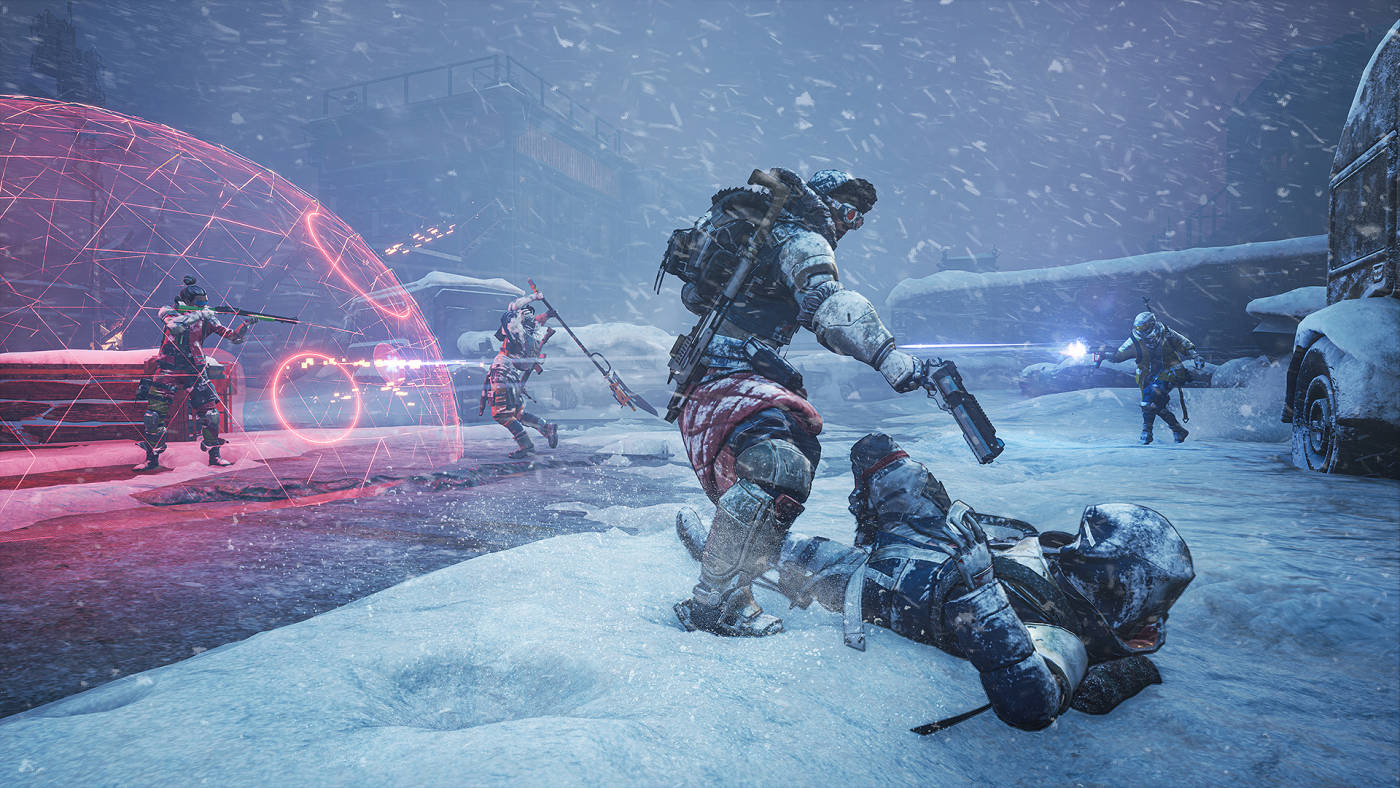 On the map, you might notice a radar sweep that periodically reveals red dots. These dots are other players, who can be engaged with or avoided. You might also encounter other players while in camps, out in the woods, or at the dropship. How you want to deal with other players is up to you...

Storms hide your location (red dots) on the map and make you hard to see, so they can also be useful to cover tactical movements. You can utilize this strategy to track other players and engage them in a fight, or to escape from them. Just be aware that storms are very cold, and if you get too cold your maximum health will start to decrease until you warm up. Strategize carefully! 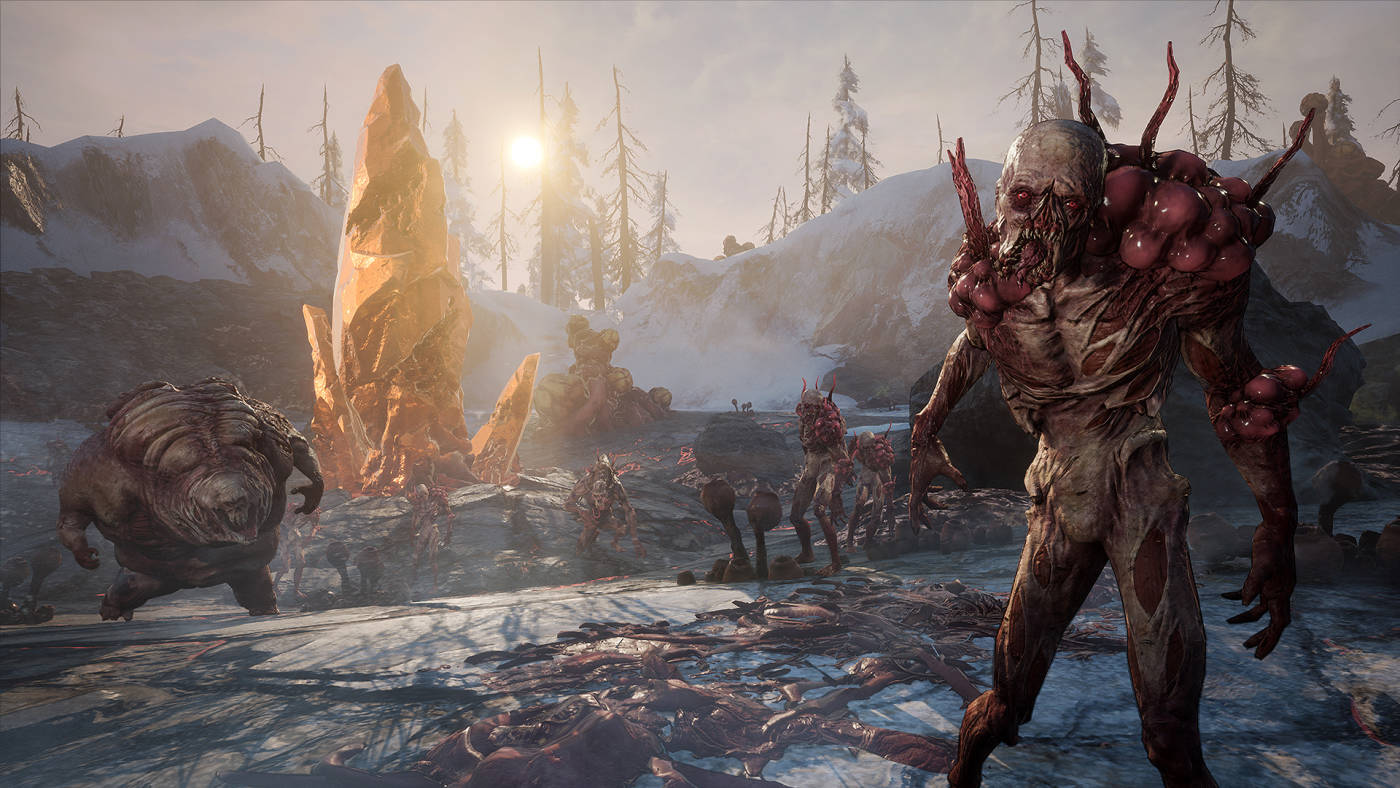 In Scavengers, teams compete to bring home the most datapoints.

Regularly check your map to locate nearby encounter locations. Icons will indicate the different resources you can find, including scrap, ammunition, healing, and food. Some encounter icons have a number - these are scoring opportunities, so it’s worth keeping your eyes peeled for them. These locations are well-defended, but reward you with the datapoints needed to win and they’re also great sources of XP.

Resource locations and scoring encounters are randomized match-to-match, so each match provides a different strategic challenge. Cunning players can use map strategy to outsmart and win against even the best PvP players!

Datapoints can be uploaded and "banked" at data uplink locations. This could be well worth doing, as uploaded data can't be lost. Otherwise, if you’re carrying a lot of datapoints and you’re taken out, you’ll drop half of those datapoints, giving other teams the chance to literally snatch victory away from you.

Later in the match, players often become the richest scoring opportunities. In fact, the player holding the most data at any given time is marked on the map. If this is you, you'll be notified and a target icon will appear on your portrait. If that happens, beware! Players are likely to hunt you for a chance to grab those datapoints!

At the end of the match, the team aboard the dropship with the most datapoints wins, but any team to make it out alive is also rewarded, so it's always worthwhile to extract! However, if your team is eliminated, or if none of your team makes it out aboard the dropship, your data and salvage are lost to the frozen wasteland. 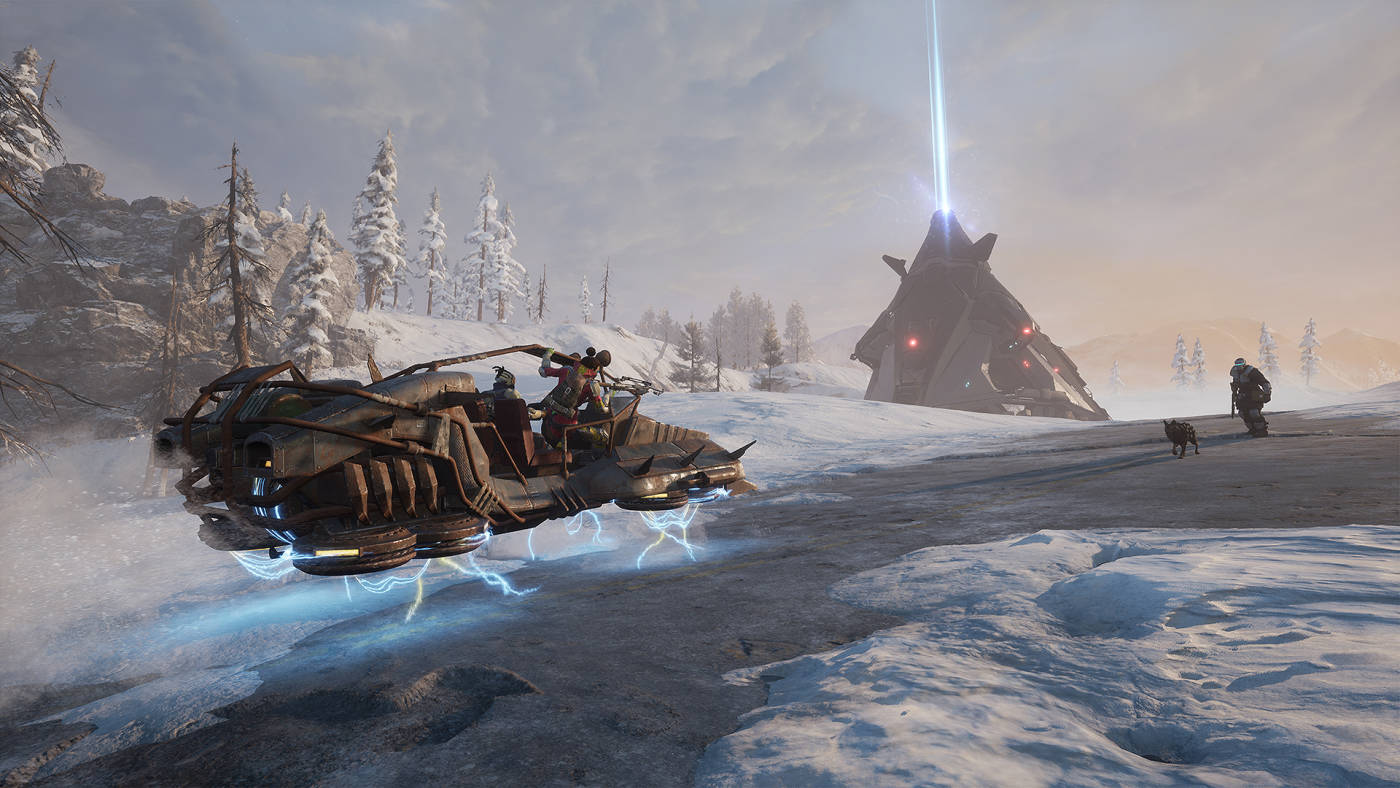 Before the storm swallows the whole region, Mother will dispatch a dropship to extract the Explorers back to orbit. The dropship touches down at a randomized location within the eye of the storm and lifts off after five minutes.

The dropship offers shelter, warmth, and protection. Along with the local geography, the dropship creates an extensive battle arena as the remaining teams converge. This is the last chance for teams to take out rivals and steal their datapoints; eliminate an enemy team, or just make it out by the skin of their teeth.

The dropship is like the “final table” in a poker game. Wild point swings often happen, as teams go all-in to win but as long as you’re aboard when the match ends, you will be rewarded.

Remember: the key to success in Scavengers is working with your teammates. Share resources, communicate via voice chat or pings, and stick together. Cooperation can often be the difference between victory or meeting a bitter, frozen end.

Good luck out there, Explorers, and keep warm!

The storms are rolling in. It’s time to compete for survival and control across a hostile frozen wasteland. Are you up for the challenge?