We’d like to run through the big change for this next update, and outline a couple changes that are still coming soon.

First up - Scavengers is getting a new resurrection system this week!

The old resurrection system of unlimited automatic resurrection, or “Autorez”, was something we were never quite satisfied with. Way back when we first introduced it, Autorez allowed us to sidestep certain issues and focus on other parts of the game. That was important at the time, and Autorez helped us get to where we needed to be. But we always knew it caused issues. Many of you have echoed those issues, and we’ve seen them amplified in the wild.

First, it trivializes death. Death with little consequence impacts gameplay. Strategies that should be a bit risky - such as teams splitting up early on - are without real risk. And without real risk they become the “right” way to play, instead of a choice. Splitting up is doubly advantageous given the team elimination rules, because it lowers the odds of all team members dying at once.

The triviality of death also impacts your connection to the game world. Scavengers is a game of hardscrabble competition in a world where survival is not guaranteed… except that with Autorez, it kinda is. This lowers the stakes and dampens the excitement.

The lack of consequences also greatly diminishes the challenge that AI pose. Death from AI is a very minor setback under most circumstances, and there’s little incentive not to recklessly zerg encounters.

Autorez also leads to bad sequences of events, such as rolling early-game PvP engagements that are inconclusive and dissatisfying, as well as leaving both teams behind the resource curve. Repeated resurrections can become cruel, prolonged death spirals from which there is no escape.

And all of these issues have knock-on effects that stretch beyond the players resurrecting. Everything from resource distribution to storm collapses to AI counts are predicated on player population. Players who are already having a bad time stuck in hopeless death/respawn loops are adding drag on the experience for all players, through no fault of their own.

Players may also have lives in reserve. Explorers carry a Clone Backup item that stores extra lives. This item has its own dedicated slot, and can’t be dropped or lost. 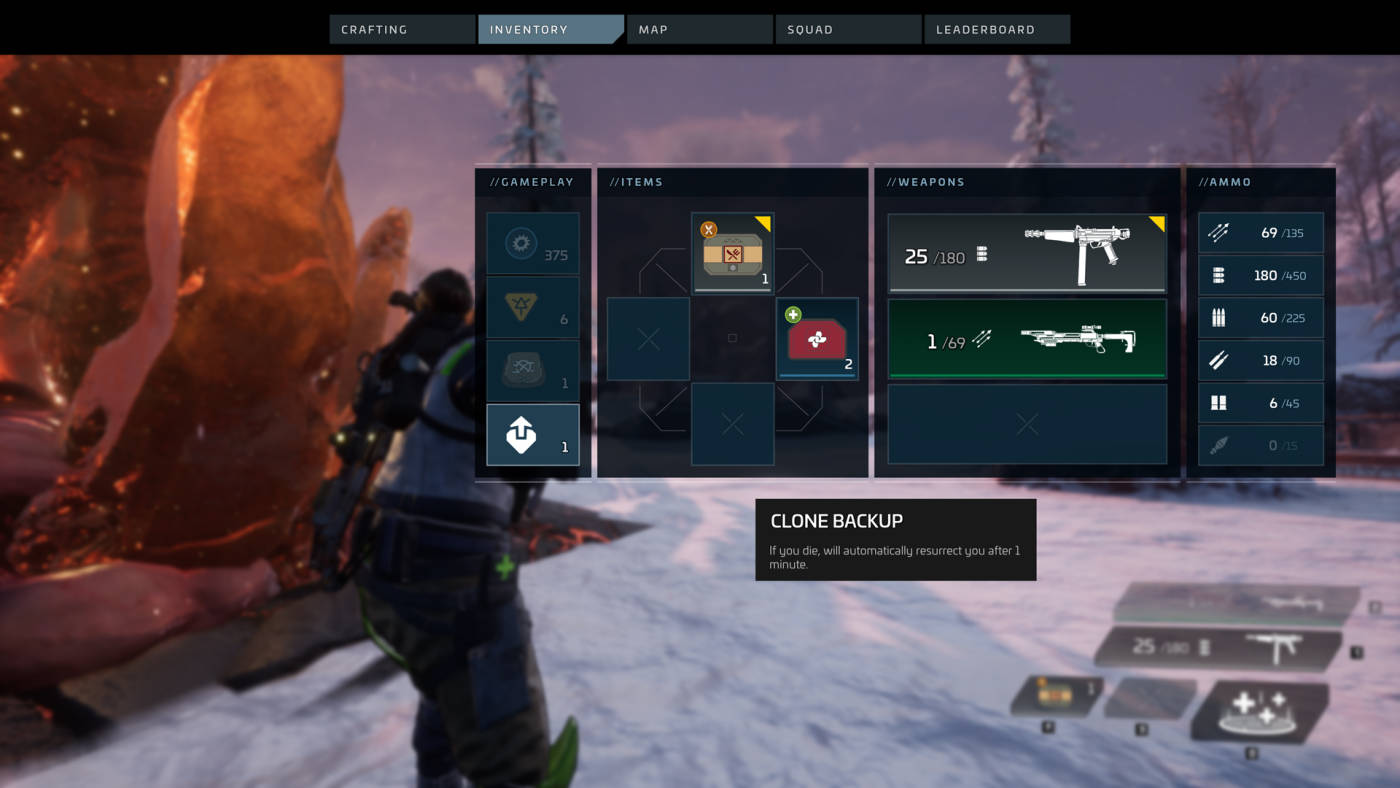 Players will be able to see how many lives they and their teammates have in their player status trays. Lives are represented by a heart/arrow icon.

If a player dies with no lives in reserve, they are eliminated.

If a player dies with one or more lives in reserve, they will autorez after one minute. When they autorez, one life is consumed.

Players start the match with one life in reserve. So you can die once and autorez. But after that, death will result in elimination unless you gain more lives.

...provided that you provide for Mother.

If your team uploads enough data at a Data Uplink, Mother will grant every teammate an additional life. If a teammate has been eliminated and is still spectating, they will be resurrected on the spot.

This is a pretty massive windfall. Thresholds are set accordingly:

Also note that if all teammates are killed, the team is still eliminated. We know this is a disadvantage to shorthanded teams, and especially punishing to solos. We are working to address this by creating options and incentives so that playing on shorthanded teams becomes more of a fun and unique challenge instead of an occasional misfortune. We really value the awesome stories that emerge from a Scavengers match, and the great underdog stories are some of the best. We need to do more to facilitate those.

Likewise, the current EXP formula puts too much value on competitive performance, which severely limits metagame progress for shorthanded teams, or even just for teams who suffer an early-game misfortune. Players should want to stick it out and see if they can pull off a comeback, or at least feel as though they aren’t being punished for sticking around and playing on their own terms. We are actively working on revisions to EXP that reward time spent playing, first and foremost. Likewise, we’re laying the groundwork for separate systems to reward competitive performance. That way, score and placement are rewarded, but your advancement in the metagame doesn’t depend on it.

Thank you for your dedication and feedback thus far. In total, we hope these changes bring a bit more shape and weight to the match. We want you to split up at the beginning of the match if you choose to take that risk. But we also want the team that stuck together to gain some ground on you when they find you and press their advantage. We want Outlander fortresses to be an imposing challenge that rewards skill and tactics. We want decisive outcomes to engagements. And we want you to be even more scared of bears!

Check out what’s new in our latest update!

We're focusing on our next game update!